Wild Indians and Pakistanis, Bengladeshis get down at Desilicious – NY Blade

They could not have chosen a worse time to start promoting a party. After Sept. 11, it seemed, house music, dancing and celebrating was the furthest from most people’s priority. On top of it all, their party — one designed for South Asians, many of them Muslim, was eyed by many with suspicion since American propaganda targeted people of Middle Eastern or South Asian backgrounds.

Despite initial apprehension and cursory barriers, however, this trio of “desis” (an affectionate colloquialism for those of South Asian descent which means “native”) forged ahead.

Ashu Rai, 35, a California-born lesbian of Punjabi Indian parents, was behind the wheels of steel. Rajesh Parwatkar, born in Bombay, and a 34-year-old employee at a financial services company, negotiated contracts with nightclubs and made sure everyone got paid.

Atif Toor, 32, a graphic designer from Pakistan, who later relocated to Connecticut, took over publicity, fliers and “the look.” Rai, Parwatkar and Toor met at South Asian Lesbian & Gay Association of New York just a few years ago.

“There’s a mainstream gay America, either white gay or black gay,” said Toor. “The others are lumped into a third block: gays from other parts of the world.” Sensing a need for a party for fellow desis, the three created “Sholay Productions.”

Sholay means “fire or flames.” “I just think any minority within a minority community means we have to assert our presence,” said Toor. “It’s supposedly diverse,” he said of the mainstream, white gay community.

In fact, some of the questions he’s heard from other gay men are: “Where is Pakistan?” or “Shouldn’t you be a cab driver or news stand clerk?”

Bollywood with drag queens
Their parties involve fun and fund-raising for South Asians. “We celebrate our culture, our music and sex,” said Rai, “all together and not at the Roxy.” Through their Desilicious parties, they have raised money for the Tides Foundation–India Fund, an organization for HIV prevention in India. The Gay & Lesbian Arab Society has also benefited from their work. Sholay Productions also helps promote South Asian authors and artists with their small, but growing profits.

To be sure, there’s a theme: think Bollywood, bhangra (percussive drums), house music and of course, drag queens. Rai, who got her start as a community organizer in California, decided to start spinning for the Desilicious events. “I started in San Francisco as a college radio DJ at K.U.S.F at 19,” said Rai. 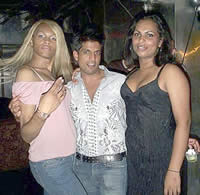 On the side, she spun in lesbian clubs. When Sholay Productions got its start, they did not have anyone to play the kind of music they wanted within the kind of price range they wanted. Rai fit the bill.

Bollywood music is a must, she said, taken from the well-known Indian film industry — a mixture of camp, traditional music and costumes celebrating popular culture in India. At times, she said, Bollywood films have a touch of the homoerotic within the mainstream movies.

You may be familiar with “Chama, chama,” from “Moulin-Rouge.” “Darshan,” a bhangra-hit made popular with the film, “Bend it like Beckham,” is representative of a constant drum beat. House hits that Rai favors are often taken from Danny Tenaglia’s “Live in Athens” CD. (Tenaglia, by the way, is one of Rai’s guru’s.) “Heart of Glass” by Blondie, is just one of the many 1980’s tunes that Rai fits in with her signature style. Finally, she blends in other unbounded musical melodies from most everywhere.

The subculture from the subcontinent has terms and definitions of its own. Most of the drag queens who frequent the Desilicious parties are newly arrived from Pakistan. They mostly imitate the appearance and behavior of Rekha, an ageless Bollywood star who represents classic beauty. “She’s as popular as Madonna,” said Toor.

Madhuri Dixit, an amazing dancer nationally known in India, is another fan of many South Asian cross dressers. Finally, Meena Kumari is a tragic character, who died of cirrhosis, said Toro, and “is like an Indian Judy Garland.”

An insider’s glossary
“Khusra” is roughly the equivalent of queer, more so used to depict someone exhibiting qualities of both sexes, like a eunuch, for instance. “Hijra” is another euphemism for a gender variant person or an effeminate guy. In general, “gandoo” (taken from “gand” which means “ass”) is the equivalent of saying “faggot.” “Baji” is frequently used by desis to describe an older “sister,” a friend of either sex.

White men who sexually prefer those from South Asia are “curry queens,” while “snow queen” is a South Asian who likes white guys. “Chikna” literally means “slick person” or a hot guy. But it is often used by desis to describe a “blond guy, nubile and clean-shaven” man who is particularly attractive, said Parwatkar.

Rai, her mouth agape at first, said that lesbians don’t use this type of slang (some of it admittedly derogatory). Recent immigrants are “often much more stylish and better looking women” compared to their fully-Americanized counterparts, Rai said. “A.B.C.D.” means, “American-born, confused and desi — much like me,” she added.

Parwatkar said the party often gets a lot of married men. There are also men who have sex with men but don’t consider themselves gay, he added.

Just like in mainstream gay New York, “bridge-and-tunnelers” exist in the desi culture. Many Desilicious partygoers come from Jersey: Edison, Newark and Jersey City. Many come from Ronkonkoma, Long Island, as well as Richmond Hills and Jackson Heights in Queens. There is even a contingent of Chelsea boys, who insist on taking their clothes off and dancing on the stage.

But many of the attendees won’t be panting after their buffed bodies. “I feel like we need to find another South Asian romantically,” said Rai. “It makes it a lot easier to come out to your parents.” Toor and Parwatkar concur: Both are involved in committed relationships with men of the same background.

While Rai said she’s happily dating, in the past she’s had a problem with going for “unavailable desi-women.” She insisted that she would “have closure if she brought home a fellow desi. We’re very supportive. It comes from our culture and our families,” said Rai.

On Friday, September 5, Desilicious, in collaboration with Curry Club—NYC , a gay Indo-Caribbean group, will present Karma Caribbean at Pepper in Tribeca. Think Bollywood and pumpkins for an upcoming Sholay Productions Halloween extravaganza, to be announced in the fall.
By Kevin Spence August 15 2003