Generally when one thinks of Indian women, the first thing that comes to mind is a midriff-bearing Bollywood heroine. That’s all thanks to our awesomely representative global entertainment market.Maybe you think of a shampoo ad or Apu’s wife from The Simpsons. Each representation places the Indian woman in some skewed, heteronormative context. But what about all the Indian lezzies and bi girls out there? We do exist, and director Ishita Srivastava wants to show the world who these ladies are in her short documentary Desigirls! (Sidenote: What is it with queer filmmakers and their exclamation points? Girltrash! anyone?)

Desigirls!, which has screened at NYU and NYC Pride, explores the South Asian LGBT community in New York City, as it highlights three Desi (term for “South Asian”) lesbians and their differences in sexuality and background.

In the trailer, we first meet Ashu, a DJ and co-creator of Sholay Productions, which throws parties for queer South Asians in New York.

While there are tons of queer venues in which many South Asians feel free and comfortable, Ashu says, in the space they’ve created, you can “dance to your favorite Hindi tune, camp it up, and … be your favorite Bollywood heroes and heroines.” Cue “Jai Ho” from Slumdog Millionaire. Umm, please sign me up! I usually pretend to be a Bollywood heroine in the comfort and presence of my bathroom mirror, but who wouldn’t love to go gay-clubbing to some badass Bollywood beats? That, Ashu says, you can’t find anywhere else. 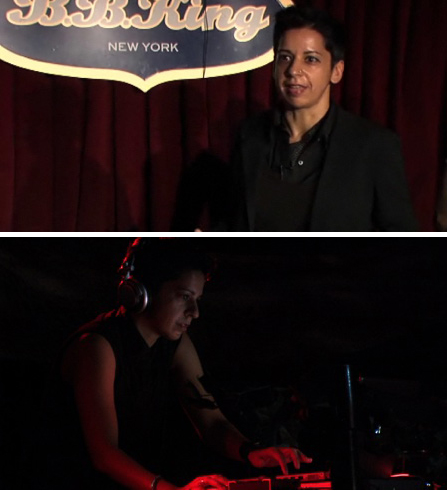 We also meet 35-year-old A, born and raised in the U.S., who doesn’t think she’ll ever tell her parents because they’re, well, old and she doesn’t want to ruin their last moments on this Earth.

I happen to think that I drastically improved my parents’ drab lives by coming out of the closet in full force, but to each her own, I suppose. A, who has to lead a double life, finds refuge in the queer community, because she feels that “half of [her] is not there” — that is, the half of her that was born a lesbian and loves other women when she’s with her family.

Priyanka was initially raised in India and now openly living with her girlfriend in NYC. She explains the difficulty of many South Asians to come out of the closet because of the “collectivist culture” of needing to be cohesive and loyal to the whole community.

I think it’s about time that us queer Desi gals get some exposure, and, as I sit here in India blogging, I propose that we create more safe spaces for queer South Asians to come out — like next door to my grandmother’s house in Mumbai, preferably. It’s so straight here. If one more person asks when I’m going to get married so that my grandma will get grandchildren before she dies, I swear to god!

The topic of South Asian women’s sexuality is so rarely discussed, but, as Desigirls! explores the nuanced experiences of each of these women, while grappling with the role of the South Asian LGBT community in shaping their identities, hopefully it will spark even more discussion. If you’re in New Delhi on May 26th, you can catch a screening at the Habitat Center, and it may also screen at the Queens Museum of Art during New York pride. We’ll keep you updated.