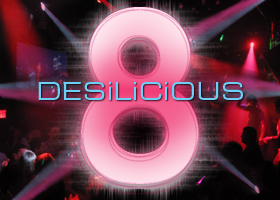 Don’t miss our 8th Anniversary extravaganza as we take the party back to Pachita — the exclusive penthouse floor of the legendary international club Pacha! Ashu Rai and DJ Bobby will be serving up your favorite Bolly Dance beats along with big-screen visuals by Neeraj. Arrive early to revel in 8 years of Desi + Queer + Fab and get in for just 8 bucks before 11pm!

PACHITA is the penthouse luxury club at PACHA and is an intimate space sleekly designed with an eclectic flair and features Moroccan vaulted ceilings. The space is complimented by plush, curved banquettes which lends the opportunity for lounging and dancing.

Enhanced by a separate VIP entrance, PACHITA’s guests feel totally exclusive. It includes a fully independent sound system, a DJ booth, a full-service bar and the most luxurious ladies bathroom in NYC. There is also a same-level balcony for smokers so you don’t have to trek downstairs.