The extravaganzas boast saree-draped drag queens, dazzling visuals and revelers of all ethnicities gyrating to Bollywood and bhangra beats. It’s all a spectacular nod to the queerness and culture of South Asia in New York and it’s at Sholay’s Desilicious parties that queer South Asians make the most of a long evening.

Since Sholay’s Desilicious was christened in 2002, crowds have been flocking to the monthly parties. Highlights have included the Gay Prid

e and Halloween events, which drew more than 700 revelers, and 2002′s “Axis of Pleasure”, a takeoff on President George Bush’s “axis of evil” doctrine.

“Our parties are primarily desi queer”, says Ashu Rai, a Sholay co-founder who also spins the music at its parties. “However, compared to

other queer (and even straight) parties, we do attract a very ethnically diverse audience, white, African American, Southeast Asian and Hispanic.”
Much has changed for desi and non-white queers after 9/11. Indian queers in New York felt marginalized, vulnerable even within the larger white gay community. The time was just about right for the formation of desi queer groups like Sholay. “Our parties represent a place where we could celebrate our ethnicity and rich cultural background and music without feeling threatened,” notes Rai.

As one of the co-founders of Sholay Productions, Rai stages Bollywood-and-beats-themed dance parties for gay and lesbian South Asians, com

plete with costumes and dance routines – inspired by the outrageous musicals that have long been the signature of the Indian film industry. The events, which have been on for about two years now, float from nightclub to nightclub and have also found a home in alternative spaces, and in broad daylight, no less.

Rai lived in California before moving to New York a few years ago. The move was not without good reasons. “The desi queer scene and culture

in New York is probably the largest and most diverse community that I have come across, even more so than London, Toronto and San Francisco,” she explains. “There is diver

sity in terms of region, religion, gender, class and profession.”

Agrees Kar Karnik, a regular at Desilicious parties, “Where else could you shed your inhibitions and dance without fear of being si 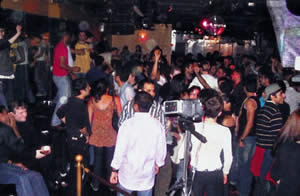 led out?” Karnik came out in the open only recently after he met desi queers at Sholay dance events. “It’s a great feeling to have it off my chest and that is because I met these wonderful guys who said it was okay to be who I was.”

Sholay often collaborates with other cultural and queer organizations, such as CurryClubNYC, an Indo-Caribbean group, and Baruch Collage. Sholay’s expansive array of events, including Laff-O-Rama comedy nights, museum festivals and book launches, also serve as fundraisers. The subculture from the subcontinent has terms and definitions of its own. Most of the drag queens frequenting the Desilicious parties are newly arrived from Pakistan. They mostly imitate the appearance and behavior of Rekha, the ageless Bollywood star. Madhuri Dixit, a Bollywood star who now lives in the US, is another idol of many South Asian cross dressers. Finally, Meena Kumari, a tragic character, who died of cirrhosis “is like an Indian Judy Garland,” says the organizers.

Just like in mainstream gay New York, “bridge-and-tunnelers” exist in the desi culture. Many partygoers come from New Jersey: Edison, Newark and Jersey City. Many come from Ronkonkoma, Long Island, as well as Richmond Hills and Jackson Heights in Queens, NY. There is even a contingent of Chelsea boys, who insist on taking their clothes off and dancing on the stage.

Apart from the Desilicious parties, small queer desi get-togethers are often hosted in Queens, NY. Since many desi queers in the New York area live with their parents, event information is strictly passed on through chat rooms and discussion boards. Neha Kapoor, an interior designer, told her parents about her partner after she graduated from Parsons School of Design. After her parents disowned her and relatives frowned, she moved out to Queens with her partner Nancy. The couple enjoys each other’s company and often visits queer friends on Austin Street in Queens. Once a month, they get together at A-Lounge on Queens Boulevard for a night of drinks and dancing. “It has been a great support system for me and my partner after we were shunned by our families and relatives,” says Kapoor. “We avoid going to Indian or straight parties…people are always looking at us as if we are from some other planet.” 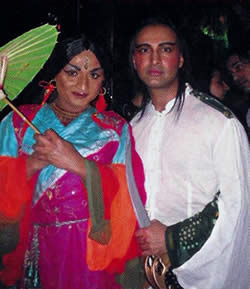 While comparisons are often drawn between New York and San Francisco, both cities with large queer populations, they are very different in their own ways. Desi queers in the Bay area often identify themselves more with the mainstream, but their queerness is more concealed.

Take for instance, Castro Street in downtown San Francisco. Here same sex couples, both desis and non-desis hang out, undisturbed, unprovoked and most importantly, not judged. There are any number of bars and club on this street which is frequented by several Indian Americans, who prefer to keep their sexual preferences under wraps. The desi gay and lesbian community, which comes together under the umbrella organization called “Trikone”, finds Castro Street a safe place to hang out and be with their partners. “I like the café on Market and Castro and Bad Land,” says Sudhir (name changed on request), who drives down from Silicon Valley to San Francisco after a hectic week of code-writing for a leading technology company.

In fact, most bars and restaurants on Castro Street are open until late and one can find people like Sudhir staying put until closing time. Queer couples interviewed for this story in the Valley admitted they found solace by going to San Francisco and most had their own favorite joints.

Life for the Indian queers in the Valley does not end on Castro Street. People like Sudhir also attend potluck and movie nights organized by friends. The average number of attendees at these events could be anywhere between six and 12.
The desi queer community usually likes to be in their own world and attends dandiya or other Indian festivals only in groups for fear of being singled out. Although the Bay Area is considered a safe place and has seen Indian engineers moving form Idaho and other places, the queer community is still rather wary. “We are safe here. But at desi parties we don’t want to take a chance. They won’t like us and more than anything, we can’t put up with all that boy-girl kissing and romance, says Rishi, a party promoter, who also wanted his real name concealed.