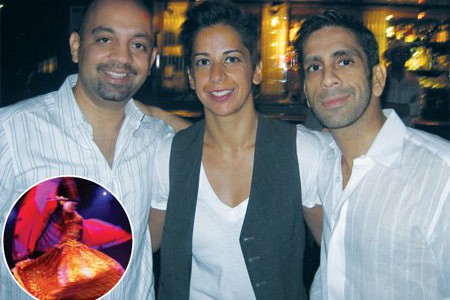 You enter the space serenaded by pulsing drumbeats. Colored lights and flickering images turn the room into a virtual kaleidoscope as a figure in exotic garb welcomes you and a crush of people smile and dance uninhibitedly. No, you’re not rolling—you’ve just arrived at Desilicious, the monthly dance party for LGBT South Asians and their friends. Since 2002 Atif Toor, Rajesh “RJ” Parwatkar and DJ Ashu Rai, a.k.a Sholay Productions, have been bringing a taste of Bollywood to gay New York—and garnering a growing fan base that crosses ethnic boundaries. “When you walk into a Desilicious party, I think the first thing you feel is the exuberance and energy of the crowd,” says Toor. “People really let their hair down, especially on the dance floor.” As Sholay readies for the ninth-anniversary Desilicious tonight at Rebel, we chatted with Parwatkar and Toor about the party’s history, their inspirations and what it means to bedesi and queer.
How did Desilicious come about?
RJ Parwatkar: It was 2002 and we felt a dance party with an eclectic mix of Bollywood and house music would be the perfect antidote for queer South Asians feeling marginalized in post-9/11 New York. We organized a gathering at a small, now-defunct venue in Chelsea called Climate 8. Ashu was at the turntables and Bollywood visuals were projected on the walls. We had 350 people.

Where did you get your name from?
RP: Sholay means “flames” in Hindi. It’s also is the name of a famous Bollywood movie from the ’70s that had a storyline about two “best friends,“ with songs and dance sequences that were very telling of their relationship. And Desilicious is a play on the words desi and delicious. Desi means “native,” or of South Asian heritage.

Did you have a nightlife background?
AT: We did events for SALGA, the South Asian Lesbian and Gay Association. But aside from that, no. Founding Sholay was definitely a trial by fire. Back in the ‘90s we [would] dance at Twilo and the Palladium so our clubgoing experience inspired us to throw over-the-top events but with a unique, Bollywood twist.

Your parties often have colorful themes. What are your inspirations?
RP: Atif is the force behind Sholay’s creative concepts. We collaborate on themes like Bollywood Jungle, Axis of Pleasure, Obamarama, Bye-Bye Bush, Bollywood Carnival and Bombay Screams.
AT: And Neeraj is our big-screen visuals maestro. He mixes Bollywood clips with psychedelic visuals live at our parties.

Are non-Asians welcome?
AT: Very welcome! The crowd is quite mixed at this point. As long as you love shaking your hips to Bollywood music, you’ll feel totally at home at our parties.

Are most of the people who come to Desilicious out in their daily lives?
RP: We get people from different backgrounds: first-generation South Asian immigrants, second-generation, people that are still not comfortable being out in public or with their family, men and women who may be married because of family pressures but are queer.
AT: A lot of the kids in their early 20s who attend have been out since their teens. This is a real shift from earlier parties, where more attendees were closeted.

How accepting is South-Asian society of gay peoples?
AT: Attitudes around LGBT issues are definitely changing. In 2009, India repealed… colonial-era sodomy laws. In Nepal, the Supreme Court [gave] full rights to gays, including the right to marry. But being out in South Asia is still not easy.
RP: Even in Delhi and Karachi, it’s not publicly acknowledged. There’ve been Pride marches in India but we have a way to go. It’s fascinating that the land that shared the Kama Sutra with the world has a hard time accepting same-sex love.

Is it different for second-generation Indians raised in the U.S.?
AT: Growing up Pakistani-American, I had a hard time coming out to family. But they’ve come a long way in supporting me and my partner, Aamir, who’s also from Pakistan. Even the extended family. We’ve been getting the “When are you two planning on starting a family?” question.

Looking back over nine years of Desilicious parties, are there any notable or funny moments you recall?
RP: We had wet-sari contest with drag queens, women and trans individuals. We sprayed water from water guns at them while they danced to Bollywood numbers. The ground became a little wet and it turned into a sari-mud melee with the drag queen winning the first prize.
AT: At one party, we had a tall, strapping Indian guy dressed in a sari, harness and stilettos. You don’t see that every day!

What can we expect at the anniversary party?
RP: It’s going to be a celebration of nine years of Desilicious: Three DJs, drag, cage dancers, exciting visuals and party favors.
AT: And wall-to-wall cuties of all colors!

What’s next for Sholay?
RP: Our Pride party on June 24, at Rebel.