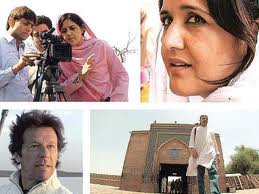 “Without Shepherds” On June 9th at Brooklyn Film Festival

The Brooklyn Film Festival was the place to be on a warm Saturday afternoon and we were glad to make the trek to Indie Cinema on Kent Avenue and 3rd street in Williamsburg where we caught the New York premiere of “Without Shepherds”. Directed by Cary Mcclelland and featuring the music of Arooj Aftab, “Without Shepherds” chronicles six individuals in Pakistan who try to navigate the chaos in the country in 2008 following the assassination of Benazir Bhutto. Among those featured in the film are Imran Khan (as he embarks on his campaign), Vaneeza Ahmed (a supermodel who pushes feminism through fashion), Sufi singer Arieb Azhar and female journalist Laiba Yousafzai. As noted by the director in the Q&A, the film includes a collaboration of Americans and Pakistanis over a two-year period and aims to cut through “alarmist media depictions of the country to celebrate the bravery of its people.”

Luckily, the festival will be screening the film one more time on June 9th, so be sure to catch it and buy tickets in advance since it will sell out!