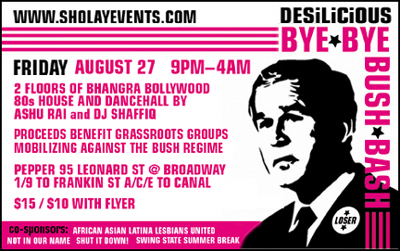 Blast from the Past

We invite you to view a video that was shot at our infamous Bye Bye Bush Bash from 2004 at Pepper in Tribeca. It was such a fun and exciting time to be in NYC, with the GOP invasion of our fair city for their 2004 Republican Convention.

To kick off the protests that weekend, we held our first Desilicious Bye Bye Bush Bash, where a portion of the proceeds went towards groups and organizations fighting against the GOP onslaught, including Swing State Summer Break, Not In Our Name and Shut It Down! And, a short video was shot at our event by Freedom Fries Productions featuring commentary from Sholay partygoers about the Republican Convention. Despite all of the hard work and partying that summer, most of still woke up depressed the morning after that election in 2004. Sigh…Watching this clip and hearing some of the tunes being played makes us so nostalgic for those parties at our Tribeca basement den!