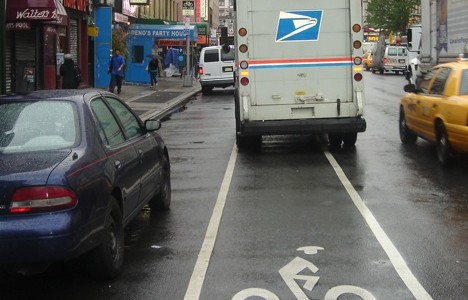 3 Reasons Not to Vote for Bloomberg

It’s Election Day 2009 and it looks fairly certain that we are going to be stuck with Mayor Bloomberg for another term. Sure, the expanded bike lanes around the city are nice, but not enough for us to pull the lever for Bloomberg. So, below are our three reasons not to vote for Bloomberg:

1. 2004 Republican convention: Many NYers remember those August days in 2004 when Bloomberg used all possible tactics to stifle protests in NYC so that the Republicans could use the city as their safe convention backdrop. Months after the convention, the New York Times found that there were arrests of over 1,800 protesters, with 91 percent of the nearly 1,700 cases that have been concluded have resulted in acquittals or the dismissal of charges. Four hundred cases were dismissed after video recordings made by volunteer observers and others showed that there was no reason for the arrests and some of the videos also exposed false testimony by the police.

2. Increase in homelessness: with the skyrocketing rents over the past few years and the elimination of key programs, there are now “34,776 people in the shelter system, almost 4,000 more than there were at the start of his first term, with another 3,000 or more on the streets”.

3. Loss of diversity and blandness of the city: OK, this last point could be more subjective, but just take a look at the number of NYC landmarks that have closed over the past few years due to high rents and greedy landlords. And, just read Jeremiah’s Vanishing New York, an excellent blog citing all of the disappearing landmarks. While Bloomberg has given deals to developers and corporations, in return the city has become less affordable and losing its diversity.

And, don’t even get us started on his attempt to overturn term limits.
For an excellent non-endorsement, also read Gawker’s article from yesterday, before entering the voting booth.