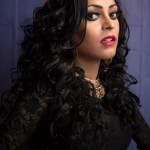 The Guardian has posted a 12-minute video, featuring Asifa Lahore and Ali’s first performance as “Shilpa” at the popular Gaysian party,  “Disco Rani”.  The video,  ‘Muslim Drag Queens” reveals the fears, challenges and exhilaration Shilpa experiences as she prepares for her debut dance number at a Birmingham club. The video  has already received over 300K views and is sure to bring world-wide exposure to the Gaysians while providing a much-needed human perspective.