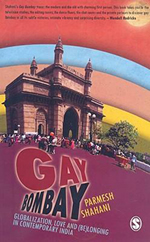 This year’s Queer and LGBT program at the 9th Mahindra Indo-American Arts Council Film Festival (MIAAC) looks quite promising with a weekend full of events. The program kicks off with the NY premiere on Friday Nov 13th of Two Paise For Sunshine, Four Annas For Rain, an ode to old Bollywood songs and an affirming relationship between a gay man on the rebound and a sex worker past her prime, featuring one of our faves, Manisha Koirala.

Rounding out the weekend events on Sunday Nov 15th are two free panel discussions at NYU, Queer Bollywood, featuring a multitude of “queer-related” film clips, from Sholay (1975) to Fire (1996) and Dostana (2008) and presented by Gayatri Gopinath, Associate Professor of Social and Cultural Analysis at NYU’s Program in American Studies. This will be followed by Queer Presence and Activism on the Independent Screen, which will look at how artists and activists are representing queer culture in light of the recent 377 decision by the Delhi High Court. This panel will feature Sunil Gupta, director of I Want to Live; Deepti Naval, actor, and director of TwoPaise for Sunshine; and Parmesh Shahani, author of Gay Bombay: Globalization, Love and (Be)longing in Contemporary India (2008) and Gayatri Gopinath. Click here for more information on the panel discussions.