Laverne Cox on MSNBC: “We are not safe in this country”

“These anti-trans bathroom bills are not really about bathrooms, it’s about whether or not we believe trans people have a right to exist in public space.” Laverne Cox spoke out on MSNBC in the wake of the administration’s latest oppressive move, withdrawing guidance issued by the Obama administration that found that denying transgender students the right to use the bathroom of their choice violates federal prohibitions against sex discrimination.

She layed out the reality of the situation from a personal and civil rights perspective,  “When trans people cannot access public bathrooms we can’t go to schools effectively, go to work effectively, access healthcare facilities, it’s about us existing in public space. And the folks who oppose trans people facilities that are consistent with how we identify, know all the things that they claim don’t actually happen it’s really about us not existing, about erasing trans people.” 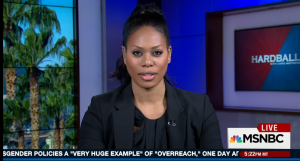