“I didn’t think it would be possible to cast or finance a film like this,” says Saria in a statement. “So to find ourselves on the cusp of a worldwide release is truly spectacular. It speaks to Netflix’s taste and the way in which they empower filmmakers.”

Loev—shot secretly in just a few days due to the filmmaker’s concerns around India’s ant-gay laws, tells the story of a desi Wall Street dealmaker who’s life is upended on a hiking trip with an old friend who’s disenchanted with his boyfriend. Much desi drama ensues. The film has received positive reviews—even in mainstream Indian media like the Indian Standard: “Loev is a tender yet brutal, slender yet sturdy road film strewn with clues to the heartbreak that eventually awaits those who dare not love beyond the prescribed boundaries”

For gallery, cast, crew and blog visit the film’s website
Check out the trailer here: 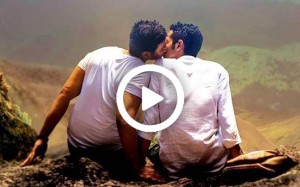