“They sing songs to each other, and the words are those that you would sing to your lover”

A slim attractive man glides through the crowd at Pepper, a Tribeca night club. It’s a Friday night, and like most Manhattan clubs, this one is packed. He is dressed in an Indian looking t-shirt bearing an image of Jesus wearing a bindi (that infamous red dot). One perfect curl falls over the man’s forehead, almost like an arrow pointing to the red bindi in the middle of his forehead. His eyes are traced with thick black eyeliner, and his hands, arms and neck are adorned with gold jewelry suitable for an Indian bride. He looks serious most of the night, doing bharatnatyam—classical Indian dance—steps in front of the mirrored wall. But after dancing and whispering in the ears of another, a smile breaks out across his dark-skinned face.

It’s one of Sholay Productions’ monthly parties, and the booming bass from the latest Bollywood and bhangra tunes fill the room. The company—created by Ashu Rai, Rajesh P., and Atif Toor—has been throwing parties for the gay South Asian community since it formed in 2001, shortly after 9/11. The timing was perfect, they say. At the time South Asians were looked at suspiciously, and the three wanted to provide an outlet for the community. “We just needed a space where we could all be ourselves, not be judged and have a great time,” Rajesh, 35, says. They began by throwing weekly parties in Manhattan , and through word of mouth they had about 300 people at their first party. They soon discovered, however, that a weekly event took a lot of work and wasn’t attracting a consistent crowd. “If you have a party every week people by natural force stop coming because the tendency is that if you don’t go this week maybe you’ll go next week or the week after,” Rajesh says. Since then their monthly parties have drawn crowds of about 500 queers, ages 21-65, with about 40 percent being non-South Asian.

The company promotes Bollywood to the gay South Asian masses, so it should be no surprise that it got its name from one of the most popular Hindi films of the 70s, Sholay, which means flame or fire. The film’s two male protagonists are depicted as close friends, but those in the gay community see something more in their relationship. “They sing songs to each other, and the words are those that you would sing to your lover,” says Rajesh, 35. The name, Rai says, is also representative of their audience, particularly drag queens, who have grown up idolizing Bollywood films and their stars. 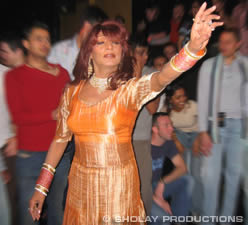 The three met hrough the South Asian Lesbian Gay Association, where they organized events as part of a small group. Of this group they were the standouts, and so a team was born. Like any successful trio (Three Musketeers, Three Stooges, etc.), each member of Sholay has his or her niche. Toor, a 34-year-old Pakistani ABCD (American Born Confused Desi), designs all the company’s promotional material. Rajesh spends his days working for a large financial corporation, and can rattle off statistics about Sholay’s numbers without a second thought. And Rai is Sholay’s resident dj.

A week after the January party, Rai and Rajesh (Toor is in Pakistan teaching design to high school students) are buzzing about its success and the respectable amount of money it raised for Oxfam’s Asia Earthquake Fund. Rai, a petite 36-year-old with short, spiky black hair, complains that she wasn’t feeling the crowd that night. Rajesh is quick to come to her ego’s rescue: “She’s so brilliant in capturing the mood of the crowd,” he says, “and she knows how to change the tune the right way so that the crowd continues to dance.”

Throngs of men in European-style jeans and fitted shirts pack the Pepper’s basement room, and some hop on the catwalk-like stage on the side of the room and watch themselves dance in front of the mirrors. Older lesbian couples sway slowly to the music, while 20-something males interlocked in grinding sessions wipe sweat from their brows. It’s pretty boy heaven, with most “angels” wearing muscle tees or striped dress shirts with jeans. Some are donning traditional Indian garb. One particularly good-looking guy with curly locks and a latte-colored complexion wears a maroon kurta pyjama (a shin-length shirt with fitted pants) and breaks out in rehearsed dance routines depending on the tune. A large video screen hovers over the crowd, playing colorful images of Bollywood actors and actresses. Behind the turn-tables, Rai has no trouble keeping the crowd moving.

The soft-spoken Rai, ironically, has the most visible—and audible—job of the three. The Punjab-born, California-raised marketing executive is the “voice” behind Sholay. She began djing back in San Fransisco, and initially took on the role for Sholay’s parties as a way for the company to save money. Now that the company is successful though, she isn’t ready to give up her gig. “I’ve found a way to relate to the crowd and know what they want to hear,” she says, the stud in her left nostril glimmering in the sunlight. Though desi music dominates the parties’ soundtrack, Rai is currently going through a house music phase which keeps some on the dance floor and sends others for a bathroom break. Rai is as much of an attraction as the lure of beautiful Indian boys, say Rajesh, a talkative guy with a cherubic face. “Our crowd increases from 11:30 onwards when they know she is playing,” he says. “She has a cult following.” Rai is modest when it comes to her spinning skills and just about anything else to do with her. She is attractive (even without makeup), and accessorizes with 24-karat gold earrings and rings (like many other Indian girls). Though she is the filter for the music played, her understanding of Hindi is limited. (She tries to pin a song to the film Vaada (pronounced Vaah-duh) and pronounces it Var-rah.) Rajesh, a Bombay born FOB (fresh off the boat, though he has lived in the U.S. for 17 years) teases her about her American pronunciation, but Rai defends herself. “I don’t know the meaning, but I can feel the passion.” 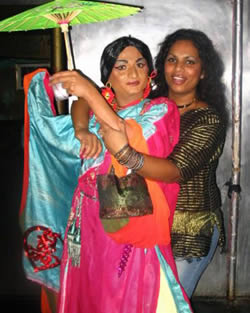 At about midnight , everyone is cleared off the small stage to make room for the show. The crowd gathers around, and those in front sit on the sticky floor to get comfortable and let people in the back get a good look. Pakistani drag queen Zeena Diwani, who plays host to Sholay’s parties each month, walks out gracefully wearing a magenta kimono-like outfit with orange and turquoise accents, fake eyelashes and lots of eye liner. She and performer Salim, who is dressed as a warrior in a white kimono and carrying a plastic sword, give a House of Flying Daggers-inspired performance. The crowd loves it. Whoops and clapping are heard throughout the show, and afterwards Diwani walks off stage with a smile of satisfaction on her face. After the music resumes another drag queen arrives. His face is painted a ghostly white, and he wears a black, full-body, patent leather cat suit and a red helmet that looks suitable for hockey. After a few stares, people forget he’s there and get back to what’s important—having a good time.

Sholay offers something that South Asian queers can’t get anywhere else, says Rajesh—comfort. “People are able to maintain their identity, and they feel free to come,” he says. “What we do is bring our community together for at least one night. Everyone is so dispersed but they know where to collect once a month, meet their friends, have a great time and go back to their regular life.” But perhaps most importantly, Rajesh says, “Where else can you find a bed of beautiful desi men and women?”

Though there is no shortage of Bollywood parties in New York (Dj Rekha’s Bollywood Disco and Basement Bhangra among them), none of them cater to the queer audience. Others have tried to throw similar gay parties, Rai and Rajesh say, including some of their close friends, yet none have been able to duplicate the success of Sholay Productions. “I think we’ve got the rhythm of the South Asian queer,” says Rajesh.

“New York is so boring right now, and one of the most happening things is our parties,” Rai says. “I can’t think of any other gay party where you can get this kind of energy. It’s not about schmoozing but about dancing and having a good time.”

A. A., 23, sits on the edge of the stage sipping a Jack and coke. He looks uncomfortable as he stares out into the crowd. It turns out A.A. didn’t know it was a gay party, though he came with his gay brother, A., 29, who is making out with his white boyfriend only a few feet away. “It’s a good crowd and the music is amazing,” A.A. says. Later in the night, after a few more drinks, A.A. has left his spot on the end of the stage and is dancing crazily on top of it.

His brother, A., and his boyfriend, Vinnie Hickey, 44, have been coming to Sholay’s parties for two years. “I like to learn about other cultures,” Hickey says. “I like the music and the culture. It’s not pretentious like other gay parties I’ve been to.”

A. A. is not the first person to unexpectedly find himself at one of Sholay’s queer parties. Straight men have walked in on accident thinking it’s a straight party, Rajesh says, and often times they stay. Women make up a small portion of the crowd, and it’s not just lesbians, but straight women too. “They like to come and dance and not get harassed,” Rai says. Celebrities have also made appearances at Sholay events. Mira Nair and her husband, Mahmood Mamdani, came to one party, and Bollywood actress Aishwarya Rai backed out at the last minute in fear of being harassed (likely to happen since so many are obsessed with the blue-eyed beauty).

Though partying is high on Sholay’s list of priorities, in the past it has collaborated with the Queens Museum of Arts, has helped launch several South Asian authors, and organized shows comedy shows with comedians like Shazia Mirza and Vidur Kapur. They want to take their parties to other cities along the east coast, and are planning a party in India for the near future. The three have struck a successful balance, and have seen their improvement over the years. “We’re like a well-oiled machine; three wheels turning together,” Rajesh says.

But despite being in the business of partying, both Rai and Rajesh admit to being homebodies. Rai’s reasoning? “I don’t go out because I hate the scene.”