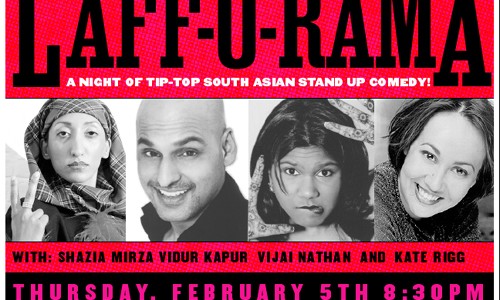 Laff-O-Rama is a night of stand-up comedy that showcases some of the leading South Asian comedians in the United States and England today, including Shazia Mirza, Vijai Nathan and Vidur Kapur. Kate Rigg of “Kate’s Chink-o-rama” MC’s. In a post-911 world, Laff-O-Rama’s comics explore the painfully funny experiences of life during wartime, growing up gay in India, an immigrant upbringing in white suburbia and the hassles of being mistaken for a terrorist. Laff-O-Rama is produced by Sholay Productions as part of MELA – a South Asian Festival, sponsored by the Indo-American Arts Council and Baruch Performing Arts Center from January 22 to February 15

Shazia Mirza is the UK’s only Muslim female comic whose distinct deadpan delivery about her experiences as a British Muslim of Pakistani descent has garnered international acclaim and press coverage, including the New York Times Magazine, Newsweek and Oprah’s Oxygen network, which filmed a profile on Shazia. She has performed all over Europe and in NY and San Francisco and is currently touring Switzerland and Kosovo. Shazia will be profiled on 60 Minutes in February 2004.
“I went to Mecca In front of the holy black stone, where you repent your sins, someone pinched my bum. I like to think it was the hand of God.” – Shazia Mirza www.shaziamirza.org

Vidur Kapur is India’s only openly gay comedian and has been getting international attention with his edgy, urban, groundbreaking comedy which focuses on his experiences as a gay Indian immigrant. Raised in India, and having lived in London, Chicago, LA and NY, Vidur comically shares his experiences with issues including homophobia, racism, classism, sexism, cultural sensitivities, and gender identity in a performance that is personal, vulnerable, irreverent and brutally honest. Vidur is a regular on the New York comedy scene including Gotham Comedy Club, and colleges and festivals around the country. He was recently on the PBS Show “Asian American”. Vidur is currently touring with “THE VERY VIDUR SHOW” in California. “I’m Indian I’m Gay I’m F**ked, The gay community in India was very small!!! There was one lesbian!!….she liked MEN!!” – Vidur Kapur www.vidurkapur.com

Vijai Nathan’s stand-up comedy is about growing up as an Indian in America, cultural clashes with her parents, and the racism she’s dealt with as a child and now as a comedian. Her latest adventure is her new one-woman show, “Good Girls Don’t, But Indian Girls Do,” a funny and poignant exploration of the struggle to discover, create and claim an Indian American identity. Vijai has performed her show at various venues around the country and was chosen as one of two comics to represent America at the Smirnoff International Comedy Festival in South Africa and was featured on 20/20 in May 2003 talking about comedy and race in post-911 America. “I used to get picked on a lot in school. I was called Hari Krishna, Dot-Head, G-d damned foreigner- and those were just the teachers.” – Vijai Nathan www.vijaicomedy.com

Kate Rigg (MC) is a Culture vulture, comic impresaria and Juilliard acting graduate and the creator of the cult hit “Kate’s Chink-o-rama: featuring the chink-o-rama dancers” and “Birth of a nASiAN”. She has been seen on “NBC Late Friday”, The FOX pilot “Kings of Comedy Primetime”, “Law and Order”, “Oz”, “Law and Order Criminal Intent”, “STAR TV”, CTV’s “Comedy Now”, and the upcoming PBS documentary “Race is the Place”. Kate continues to perform in Kate’s Chink-O-Rama and continues to spread the funky urban Asian word on standup mics all over the country. www.katerigg.com.

Indo-American Arts Council (IAAC) supports all the artistic disciplines in classical, fusion, folk and innovative forms influenced by the arts of India. IAAC works cooperatively with colleagues around the United States to broaden its collective audiences and to create a network for shared information, resources and funding. The focus is to help artists and art organizations in North America, as well as, to facilitate artists from India to exhibit, perform and produce their work here.