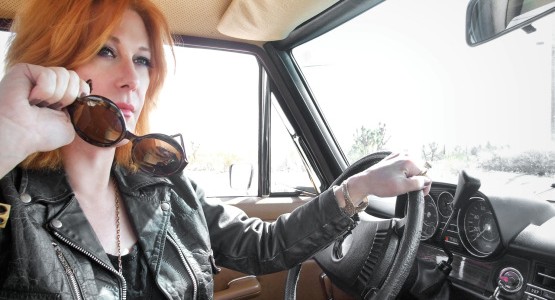 With NYC pride kicking off, read the latest Paper Magazine interview with Justin Vivian Bond on Pride and “being an arrogant feminist”.

We can relate to Justin’s comparison of Manhattan Pride today vs. SF Pride in 1989 (my first Pride), where “..you marched and at the end, everybody was there together and there was a show or whatever.” The march from Castro and Market to the Civic Center would end in a very large dance party that was free and open to all. And then there is this memorable story by Mx. Bond:

Parade marchers ..” had taken this car and painted it to look like a police car. Instead of a siren on the top, they had this huge papier mâché high heel on the top with a crazy, fucked up-looking person in a bikini, egg yolks over their flat chest. They’d dead-bolted an apple crate to the trunk of the car and everybody was wearing combat boots and beating the shit out of this police car with high heels. I said “My people!” and grabbed a high heel. By the time we got to the end [of the parade] the car was just destroyed.”