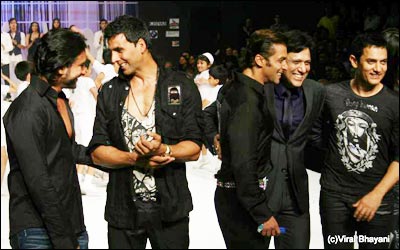 The Best of Couture Week

The internets have been all abuzz with Couture Week, which is coming to a close in Bombay. We’ve been reading about the stir caused by Suzanne Khan blowing a kiss to her hubby Hrithik from the catwalk, Sridevi on the runway looking very uncomfortable in a tight-fitting Hervé Léger dress (but stunning later on in a Manish Malhotra sari) and the boycott of Couture Week by designer duo Abu Jani-Sandeep Khosla, because they couldn’t get enough VIP seats for their celebrity friends.

However, the highlight for us was the merchandise launch for Salman Khan’s Being Human foundation, where he managed to get his male co-stars to strut the runway with him, all in the name of charity, of course. And, surprisingly Salman looks damn good (his brothers not so). Saif looks amazing as always, Aamir shy and cute and Akshay, yikes – those pants and those boots are a no no! Finally, we’re not sure what to make of Avanti Birla’s interesting dress and Robert Cavalli necklace and what the hell happened to Preinty Zinta??