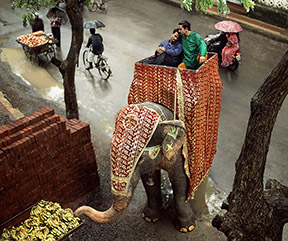 New York-based photographer and visual artist Braden Summers has been glope hopping to create sumptuous, staged photographs representing romantic gay couples. He was inspired to create the series when working on a photo project in Paris. In the process, he was struck by the fact that the romantic imagery in art, fashion, photography and popular culture is overwhelmingy hetero.

He points out, “When thinking of iconic romance, ask yourself if any imagery (paintings, photographs, film-stills) comes to mind that is not showing heterosexual couples? Probably no.”

While some may find that the images are exotifying couples in non-Western cultures, the overwhelming success of his All Love is Equal Kickstarter Campaign and the attention his photographs have been grabbing show they’ve struck a chord globally. The desi romance images have enough Bollywood flair to them to make our hearts go flutter.