Harish Iyer’s mom, Padma, felt her son needed a little push in the romance department and like many meddling Indian parents, she decided to take the matter into her own hands by placing a personal ad in a local Mumbai newspaper. The fact that her son—an activist and eligible bachelor—happened to be gay did not deter her. According to Iyer, three major newspapers refused to carry the ad because it was illegal (since homosexuality has been re-criminalized in India since 2013), but Sachin Kalbag, the executive editor of the Mumbai daily Mid-Day, didn’t hesitate to publish it.

“It raised no eyebrows at all,” according to Kalbag. “We are pro-equal rights and have been running vociferous campaigns against discrimination on the grounds of sexual orientation.”

Mum’s ad created quite a buzz and elicited several responses. “My mum called me this morning saying three people have responded so far. She asked me what to do next, how to proceed, so I told her, ‘proceed like you would have if you were looking for a girl for me’,” says Harish.

“I will take my time before I give my nod. I am an animal lover and would want my partner to be one. And I am going to have the last word in who I choose because I am going to be living with him, not my mother. Having said that, it is my mom who has led me into finding someone for myself.” 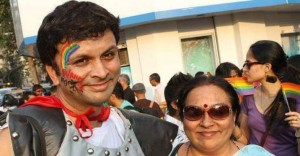 Iyer and his mom Padma at a gay pride event