“It is official, Mr.Pahalaj Nihalni put the final nail in my coffin,” filmmaker-producer Jayan Cherian posted on his Facebook page in response to a letter received by the Central Board of Film Certification about his queer themed film Ka Bodyscapes. The Indian regional censor board claimed that  “(sic)… the film is glorifying the subject of gay and homosexual relationship, nudity accentuating vital parts of male body (in paintings) in closed shots in the whole movie. The film is explicit of scene offending Hindu sensibilities depicting vulgarity and obscenity through the movie.”  The CBFC went on to say the film would be barred from being screened as it “may cause law and order problem in society.”

The Malayali film tells the story of three young people, Haris, a gay painter; Vishnu, a rural kabaddi player and their friend Sia, a feminist activist and their struggle to find space and happiness in a conservative Indian city. 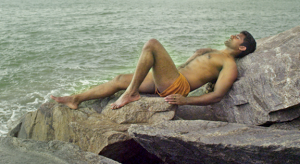 In response to the ban, Cherian told The Wire, “We feel that the CBFC’s decision is biased against the sexual orientation of the characters portrayed in the film and the LGBT community of Kerala who made this film possible with their support.  We believe that we have a right to make our films according to our artistic conventions and we are not ready to take any editorial advice from the state. We are planning to move to the court to challenge the CBFC’s decision. It is unfortunate that the CBFC is being used as a tool to propagate homophobia and sexual bigotry.” Watch the trailer for Ka Bodyscapes here: