Its time to take our outrage at our abhorrent Cheeto in Chief and his GOP lackeys back to the streets! This Saturday, there will be marches around the country including the massive Women’s March on NYC, organized by the Women’s March Alliance. The rally starts at 11:30 AM at Columbus Circle with the march kicking off at 12:30 – 1.  Marchers will walk east on 59th Street and then head south on 6th Avenue to 46th Street. Keep checking the Women’s March site  or their Facebook event page for up to date details.  Its hard to believe its been a year since 45 seized power but here we are. If your part in the resistance has been limited to liking posts on Facebook, this is your chance to get up, get involved, connect on the ground and gear up for the 2018 midterm elections. If you’ve been fighting the good fight since last January—this is a moment to re-energize. See you on Saturday! 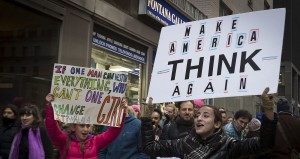