On August 14th and 15th, we celebrate the 71st birthdays of Pakistan and India respectively. Why celebrate an independence hastily crafted by British colonizers triggering one of the bloodiest upheavals in human history? In these unsettling times marked by nationalism, authoritarianism and a creeping tribalism here in the U.S and across many parts of the globe, national independence days are taking on an alarmingly jingoistic edge.

Muslim refugees clamber aboard a train near New Delhi in an attempt to flee India, Sept, 1947. (AP)

In 2000, after battling the Federation of Indian Associations for years, SALGA (the South Asian Lesbian and Gay Association) won the right to march in the India Day Parade. Many of us who were active in SALGA during those years debated the value in participating in an event that represented so many of the things we rejected as desi-queers. Ultimately we took on a sustained effort to march because being denied that right was unjust and a denial of our very existence by the conservative organizers of the parade. So we organized annual protests on the sidelines, formed coalitions with progressive South Asian groups, held outreach events and ultimately worked with the local community board to pressurize FIA to permit us to participate in the parade.

Since then, the desi-queer community continues to grow and show its vibrancy with New York newcomers seeking out their queer brown kin. LGBTQ immigrants from across South Asia and the global diaspora make it here despite tightening immigration policies, economic challenges, xenophobia and outright racism. Internationally, activist groups in places like India, Pakistan, Bangladesh, Nepal, Trinidad & Tobago, continue to make strides—big and small—in expanding LGBTQ rights despite strident and often violent opposition. 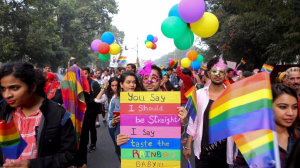 LGBTQ rights activists and their supporters at a Pride march in New Delhi Nov. 12, 2017. (AP)

So…yes…it’s complicated but we will celebrate our desi independence in our own uniquely desi-queer way.

NYC LGBT Historic Sites Project has included an overview and slideshow documenting SALGA’s organizing efforts in response to their exclusion from the India Day Parade.